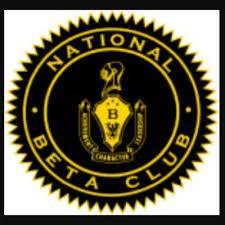 In everything we do as a National Elementary Beta organization, it is important to remember the four pillars on which we stand. Service, Leadership, Character and Achievement are the ideals that every member of the U.S. Jones Elementary Beta Club is expected to embody at all times. With that being said, please be advised that first and foremost we are a service organization. This is not a social club.

Standards of membership in the U.S. Jones chapter of the National Elementary Beta Club must conform to the general features as laid down in the National Constitution. Fourth and Fifth graders at U.S. Jones are eligible for membership. The scholastic requirements for membership in this chapter of the National Elementary Beta Club for 2020-2021, shall be, students must have an overall A average, this will be based on the first 3 nine weeks of the academic school year 2020-2021. The prospective member must demonstrate a history of service and leadership within the community and school. The prospective member must not have received any official discipline referrals for the current school year 2020-2021. Above all the candidate must uphold the U.S. Jones vision statement, “Love, Learn, Lead”

The induction of new members into this chapter of the National Beta Club shall be one of the dignity appropriate to the ideals of the organization. Induction will be held at the discretion of the sponsor(s). The attire for the induction ceremony will be white dresses for the girls and white dress shirts with black pants for the boys.

The officers of this chapter of the National Elementary Beta Club are: President, Vice President, Secretary, Treasurer, and Chaplain. The responsibilities and duties of the officers will be determined by the sponsor(s). Officers will be elected each May by their fellow Beta members. Only fifth graders can run for president, vice president, chaplain, treasurer, and secretary. Fourth graders are not eligible to be officers

Meetings will begin after school is back in session in August.  Meeting times will be determined at the beginning of each school year. Meetings will be mandatory. Members should notify a sponsor if they are to be absent.

Any other unexcused absence from a meeting will result in dismissal.

In all cases, those placed on probation will receive written notification.

Any member of this Chapter of the National Elementary Beta Club will be placed on probation if his/her grades fall below the set standard, A average. The member must bring his/her grades back up within the next grading cycle. If a member fails to do so, he/she will be dismissed from the U.S. Jones Beta Club. All members will report their grades to the sponsor at the end of each 9-week grading period.

Any member of this chapter of the National Elementary Beta Club will be dropped from membership if he/she does not maintain the required grade or for any reason(s) in the above section. A member may also be dropped from membership for moral or disciplinary reasons that are deemed sufficient by the sponsor and administration. Students dismissed from the Beta Club for disciplinary reasons will not be considered for future membership.

As soon as possible, after returning to school in the fall term, the Chapter will undertake a series of service projects which will be of benefit to the community. The main fall project will be with Christmas on the River. The students will have an important part in the preparation and will participate in the day parade. Students will also present potential  projects at the first meeting upon returning to school. At the second meeting the projects will be voted on. The recommended projects will be presented to the sponsors and school administration for final approval. At a minimum, the U.S. Jones Elementary Beta Club will sponsor two service days per year, one for the fall term and one for the spring term.

Each member is required to obtain 2 hours of independent service in the fall, and 2 hours in the spring for a total of 4 hours per school year. These hours are to be completed independently, as club service projects do not count toward individual hours. Members are required to complete the designated service hour form for each individual service project, and have an adult sign-off. Parents cannot sign-off on service hours. Service hours earned during school hours, at U.S Jones or off-campus, must be pre-approved by a Beta sponsor.

Students who do not complete their required independent service hours by the last Monday of the school year will be dismissed from the U.S Jones Elementary chapter of the National Elementary Beta Club.

**subject to the discretion of the sponsors and administration***

Fifth graders in the U.S. Jones Elementary Beta Club will participate in various competitions at the state level. There will be a cost for convention (state and national) more information will be given out in the fall about the cost of this trip. Students will participate in fundraisers that will lower the total cost. This balance is to be paid in full the Friday prior to leaving for the trip. Any deposit made for conventions, with exception to the first $50, is nonrefundable.